Lawsuits cost New York taxpayers over a billion dollars a year – we’re working to change that.

If someone breaks into your house and injures themselves, they can sue you – we’re working to change that.

If a worker injures themselves while drunk on the job, the employer is liable – we’re working to change that.

A party only 1% at fault can be forced to pay 100% of a judgment, encouraging lawsuit abuse – we’re working to change that.

Fear of lawsuits causes providers to order unnecessary tests and procedures, driving up healthcare costs – we’re working to change that.

ATTENTION: This site is no longer operational. Here is our new site - lrany.org

The Lawsuit Reform Alliance of New York (LRANY) is a broad based coalition of hardworking New York business leaders, professionals and taxpayers who are committed to changing New York’s burdensome and expensive legal system to help create more jobs and energize our State’s economy.

Click here to write a message to your elected officials.

Click here to write to your elected officials on a specific issue.

This week, to continue the LRANY video series, we bring to you a video on the medical apologies. Under current law, statements of apology or regret made by a health care provider can be used in court against the provider as evidence of wrongdoing.Consequently, doctors and hospitals are unable to apologize or express sympathy to injured […]

By: Michael Seinberg Business travelers round the world are wearing black armbands today thanks to a ruling by an Australian court. No more frequent flyer miles? No free drinks in flight? No more hotel discounts? No, actually, no more employer supported sex. In 2007 an Australian government worker was sent on an overnight trip that […]

This week, The Journal News published a letter to the editor written by LRANY’s Scott W. Hobson.  This letter was in response to a September 17 article:  Tappan Zee Bridge: State to fight EPA ruling on loan.  Hobson points to the Scaffold Law as a means of decreasing costs for the new Tappan Zee Bridge project. […]

Last night Fox 5 News aired a segment entitled “Frivolous Lawsuits in New York City” featuring LRANY Executive Director, Tom Stebbins. The story discussed the problem that New York City faces with frivolous lawsuits and how these cases are clogging our court and draining the pockets of hard working taxpayers. Highlighting cases such as the […] 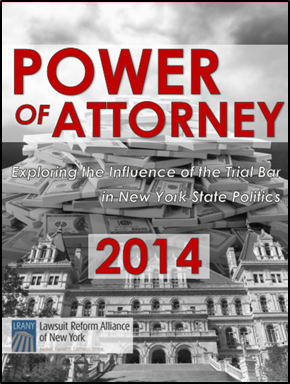